Partus (birth) is a collaboration between visual artist Ruth Jones and electronic composer Andy Wheddon that takes as a starting point a CTG scan of a medicalised labour and birth. The 10ft long paper trace contains ultrasound recordings of a number of bodily rhythms that faithfully record the labour, such as the mother’s contractions and blood pressure and the baby’s heart rate. Partus reinterprets and enacts the trace as sound, mediating between mourning the medical-technological intervention in labour and  reclaiming the human experience. Partus echoes the altered experience of time that being in labour induces, linking the project to Jones’ on going exploration of liminal or threshold states. The performance combined electronic samples and the live voices of improvisational singers Maggie Nicols and Emily Laurens, to take the audience on an immersive journey through the rhythmic primal beats of one of life’s great transitions – birth.

The first performance of Partus took place on Saturday 12th December at Small World Theatre, Cardigan. If you would like to book Partus for your venue, festival or event, please email Ruth Jones holyhiatuswales@gmail.com

15 minute documentary film about the making of Partus

Still photos below all by Stephen J Morgan 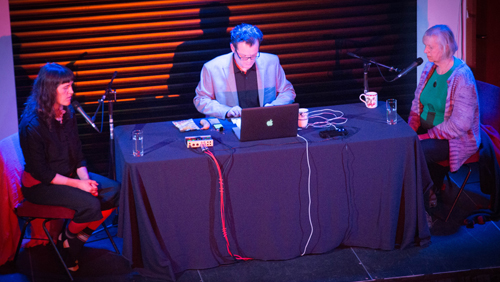 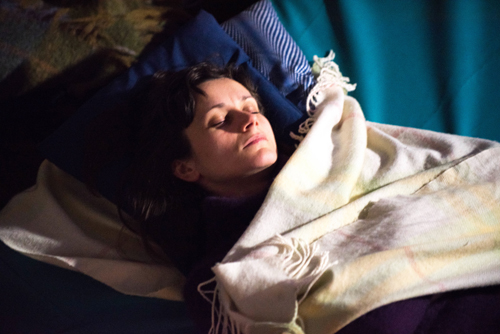 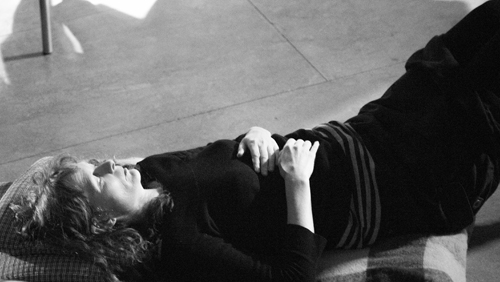 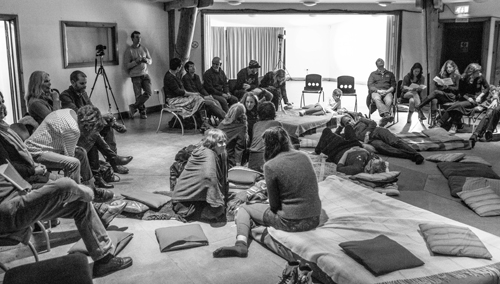 Ruth Jones is an artist based in west Wales and the founder of Holy Hiatus. Her work explores liminal, or threshold states of being or consciousness. The uncertainty of these in-between states has led them to be regarded with suspicion and anxiety, but they also have enormous creative potential and can be seen as spaces of ‘becoming’, where our identities undergo change or transformation. Through installations, public art projects and film work, Ruth uses ritual patterns to create physical or psychological spaces in which the possibility of an experience of liminality can occur for the viewer or participant.

Andy Wheddon is an electronic musician, a sound designer and an audio artist. He co-runs the label Concrete Plastic from his home studio in rural Pembrokeshire. Andy uses homemade electronic instruments combined with field recordings, synthesisers and computers to create his music. His sound is organic; drum ‘n’ bass beats are deconstructed into decaying textures – there are faint echoes of blues and jazz and a musical tip-of-the-hat to Musique Concrète.

Emily Laurens is an artist working in a variety of mediums: as a designer and maker often working with sculpture and installation; as a performer, writer and director specialising in puppetry and clown; and as a singer. Performances often explore the hinterland between theatre and ritual. Her work is innovative and inspirational, posing challenging questions. Embracing complexity and working with comedy and tragedy to explore themes such as loss and interconnection. She has worked in theatre since 1998 as a designer, maker, and performer for companies including the Little Angel, Theatre-Rites and The Insect Circus. In 2007 she co-founded, Feral Theatre, an international company she co-directs.

“I really enjoyed the fact that I could lie down during the event on a soft mattress, next to my daughter and let the ambient sounds of what I could imagine it to be like in a womb wash over me….I found the whole experience quite powerful, and to be lying within that space next to my daughter to whom I had given birth to 9 years ago was moving”.

“When I went to see Partus as a 9 year old I felt it had a very deep meaning. It was kind of like telling how you feel in amazing music”.

“It was strong and real and physical and emotional. It was good”.

“Very emotional and intense – in an amazing way. It felt like I was experiencing birth as a baby but with memories of being the mother. It gave me chills, goosebumps, some parts were almost too much for me (because of my memories) and others I wanted to go on forever…thank you! Loved it”.

“Intense – a build up – I moved from being interested to feeling uncomfortable and agitated (then fearful) I decided to move and this helped – I felt more in charge – moving and releasing. The end was beautiful – a relief. Thank you.”

“I found the first 10 minutes or so to be quite discomforting and uneasy listening. But equally felt reassured that something powerful was going to happen! As I got used to the sound and adjusted to the beats and layers of rhythm I began to relax into the experience….I will never forget this powerful and moving experience. Praise indeed to all involved”.

Partus is funded by The Arts Council of Wales