Holy Hiatus invited Stephen to Pembrokeshire back in 2013 in response to the film Griefwalker, since then he has led teaching events and given performances here, and has even established a UK branch of his school Orphan Wisdom which convenes again this year at Llanrhian Hall in May. He is the most extraordinary orator, mesmerising, and life-changing.

Stephen is on tour in the UK with singer-songwriter Gregory Hoskins and full band performing Nights of Grief and Mystery. All the other gigs take place in major cities including London, Edinburgh, Brighton, Bristol. We are so lucky to be hosting this event in Fishguard with its population of 5000. Normally we have to travel to experience events of this international status, and here it is on our doorstep

What is Nights of Grief and Mystery?

Nights of Grief and Mystery weaves together in a most wondrous way, the extraordinary talents and skills of internationally renowned author, teacher, storyteller, and cultural activist Stephen Jenkinson with those of Toronto-based singer-songwriter Gregory Hoskins and his band. This an evening for young folk and old folk, for elders in training—an event of interest to parents and grandparents, teachers, scholars, health care professionals, clergy, counsellors, and anyone else pondering matters around human development, rites of passage, aging, wisdom.

Stephen describes these events like this: “Concerts for Turbulent Times they surely are. We might not be considered poets, but the evenings are poetic. They are musical and grave and raucous and stilling, which probably means they are theatrical. They are nights devoted to the ragged mysteries of being human, and so grief and endings of all kinds appear. Sonorous hours and rapture, served by whatever talents of tongue and timbre have been granted the band, by the reckless labours of friends and accomplices who fashion genuine gigs in their home towns from their dreams for a better day, and by the willingness of the sold out houses in Australia, New Zealand, Canada, the UK, and the USA to be drawn into wonder and poetry and the kenning.”

They are nights in which love letters to life are written and read. There’s some boldness in them. They have that tone. These nights have the mark of our time upon them, and they’ve become timely, urgent, alert, steeped in mortal mystery, quixotic, with some swagger. What would you call such a thing? Nights of Grief & Mystery. Part poetry, part lamentation, part book reading, part ribaldry, part concert, part lifting the mortal veil and learning the mysteries there…that’s what’s in store—and something you’ll not want to miss, or say you did.

About Stephen Jenkinson Stephen Jenkinson, MTS, MSW, RSW, is an internationally known teacher, author, storyteller, farmer, sculptor, musician, spiritual activist, ceremonialist, and founder of the Orphan Wisdom School in Ontario, Canada. He holds Masters’ degrees from Harvard University (Theology) and the University of Toronto (Social Work). A highly sought-after speaker and workshop leader, his work has been featured in national radio and television documentaries on care of the dying and wilderness creativity. He is the author of Die Wise: A Manifesto for Sanity and Soul, the award-winning book about grief, and dying, and the great love of life. He is the subject of a National Film Board of Canada documentary, Griefwalker. He brings teachings of the ramshackling kind, about honour and grace under pressure, about how we might learn our darkening times. His new book, Come of Age: The Case for Elderhood in a Time of Trouble, wonders about elderhood in an age of age-intolerance, and about the withering World Tree.

About Gregory Hoskins Often described with epithets like “best kept secret”, “unsung”, and “an artist that has flown under the radar”, Gregory Hoskins’ career spans 11 recordings over 27 years and record deals on three continents. Hoskin’s lyrics and voice tend to break and bind at the same time, songs steeped in the drama of living awake with one foot in the sorrow of it all and the other in the beauty of it all…and he does it over propulsive grooves, brooding electric guitar work, and rich sonics. Material from his most recent release https://gregoryhoskins.bandcamp.com/album/vain-alone-20 is featured in the Nights of Grief and Mystery. Please visit https://gregoryhoskins.bandcamp.com/ to listen.

“What Stephen and Gregory were able to conjure is something rare and mysterious. A true gift…”

“I went and was absolutely blown away. I was incredibly moved and inspired by both Stephen’s words and Gregory and the band’s music. Thank you so much for sharing this unique and powerful work with us!” 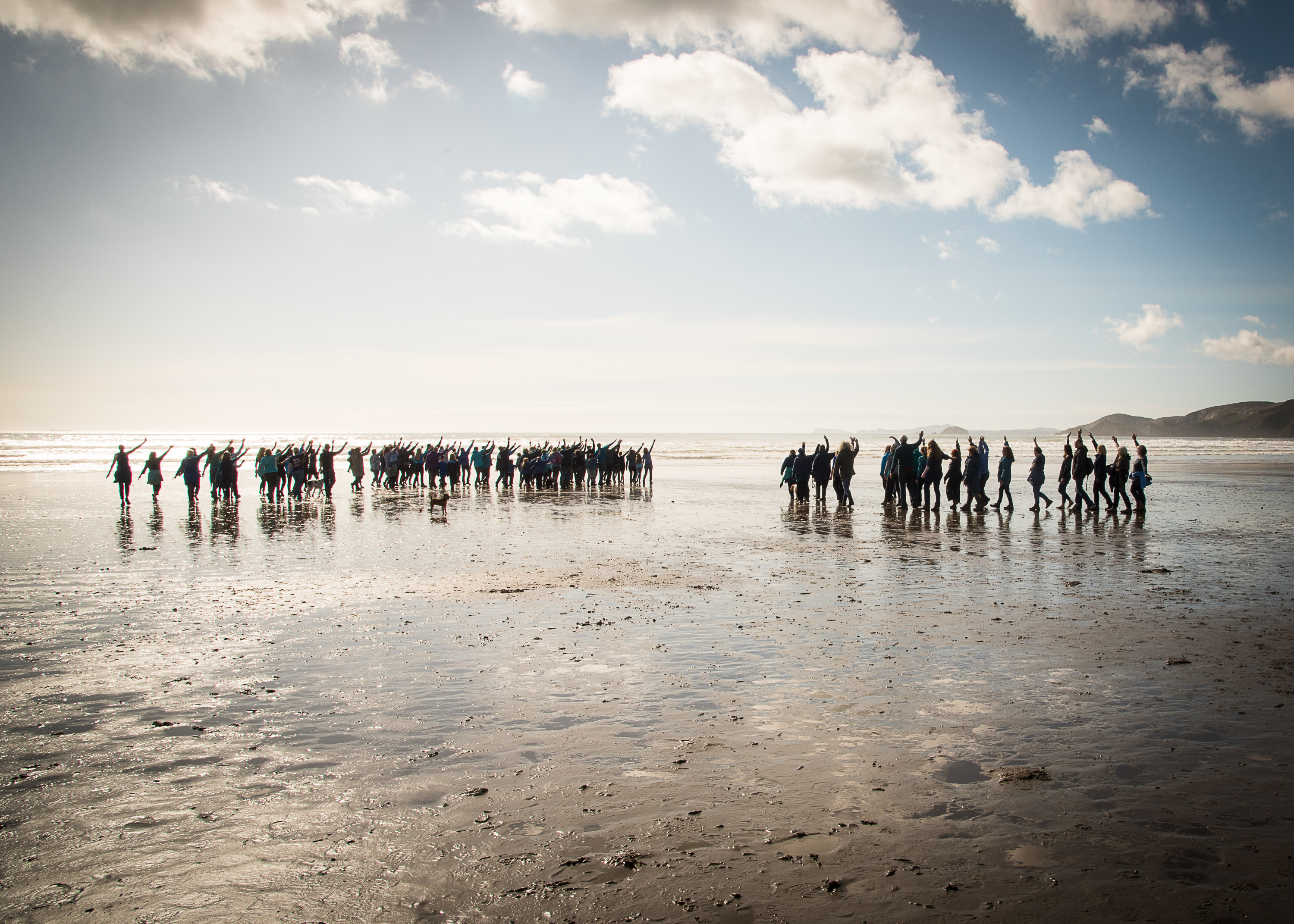 Get ready for Big Flock 2019! Last year’s flock was so wonderful, uplifting and energising and we had such lovely feedback from people who took part, that we’ve decided to make this an annual event. If you want to be part of this year’s flock, it’s on Thursday 25th April 4-5 pm Newgale Beach. It costs £2.50 per person, £1 of which goes to RSPB. Please book ahead, so we know how many people to expect.

Here’s some feedback from last year:

“I just wanted to say how much I loved today. What an amazing experience. I found it truly transformative, a really meditative experience being within the swirl of others all moving, swirling around with glimpses out to sea with the sun sparkling on the waves and along the beach with that magical haze. And such a sense of community and camaraderie amongst the dancers”

“So brilliant! One of the loveliest things I’ve done for ages! Thank you”

“It was such a beautiful day and I remember it fondly. It was a real privilege to feel part of a flock, flowing and moving and dancing about on the sands”

“A magical opportunity to gather as a flock with friends, strangers, birds of a feather. To soar across the beach and weave around others, making shapes and patterns, laughing!”

If getting deeper into outdoor movement appeals to you, consider joining Zosia Jo and the Joon Dance team for 2 days of outdoor movement and dance for Spring Gather. For more information and booking click here

And here’s the film we made: 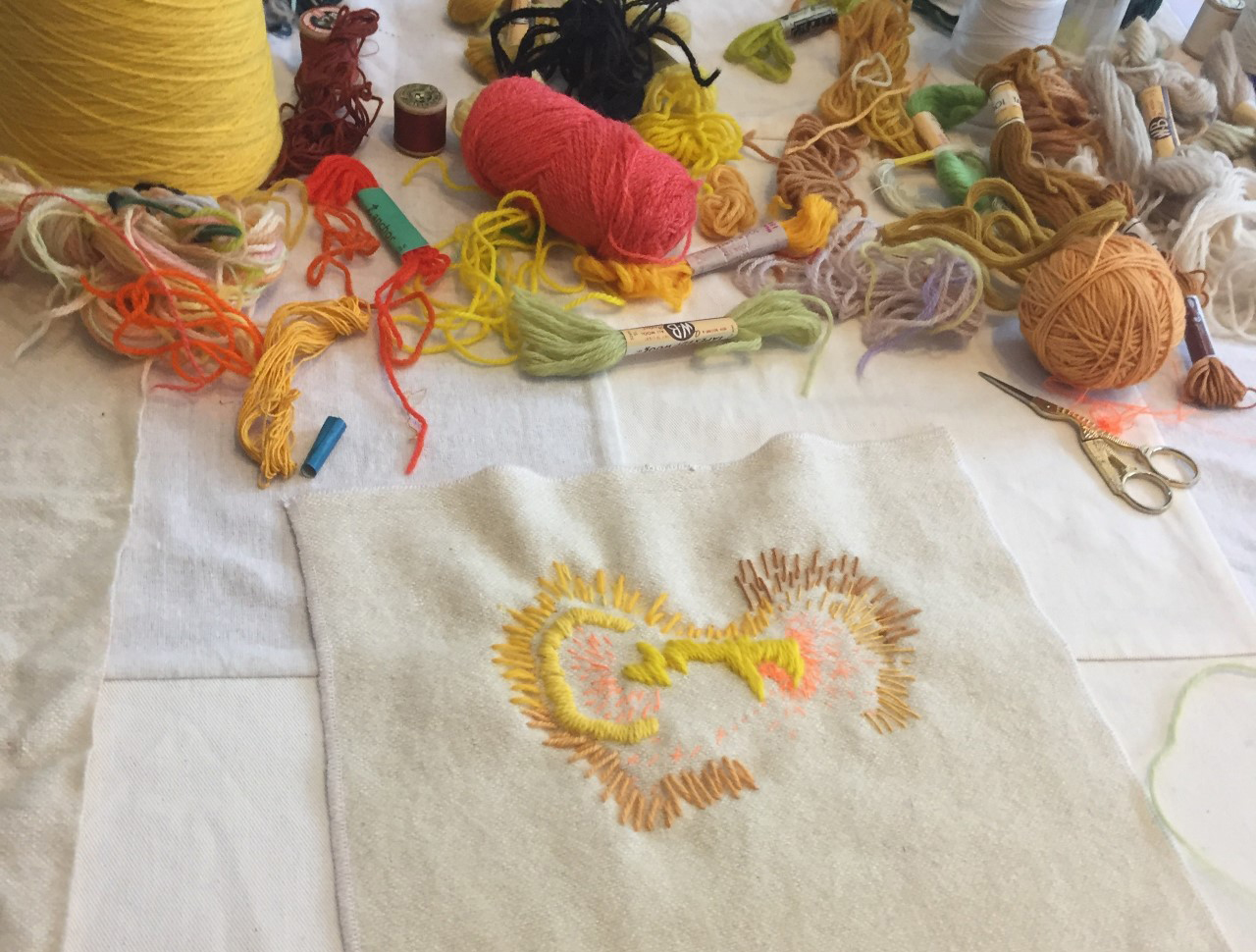 Collaborative Stitch, a responsive spontaneous stitch conversation hosted by textiles designer Jolette Le Roux and visual artist Ruth Jones is coming to Theatr Gwaun. The event is free but is limited to 10 people, so please book in advance. Watch the short video below for an idea of what we will be doing. It is fun, informal and relaxed. You don’t need to have any experience of sewing to come. The collaborative pieces that we make will become part of the S A M P L E collection to be reused and upcycled into something new at a later date. It may become part of a piece of clothing, or a piece of textiles sculpture….who knows?

If you would like us to host a Collaborative Stitch for your venue or community, please email holyhiatuswales@gmail.com 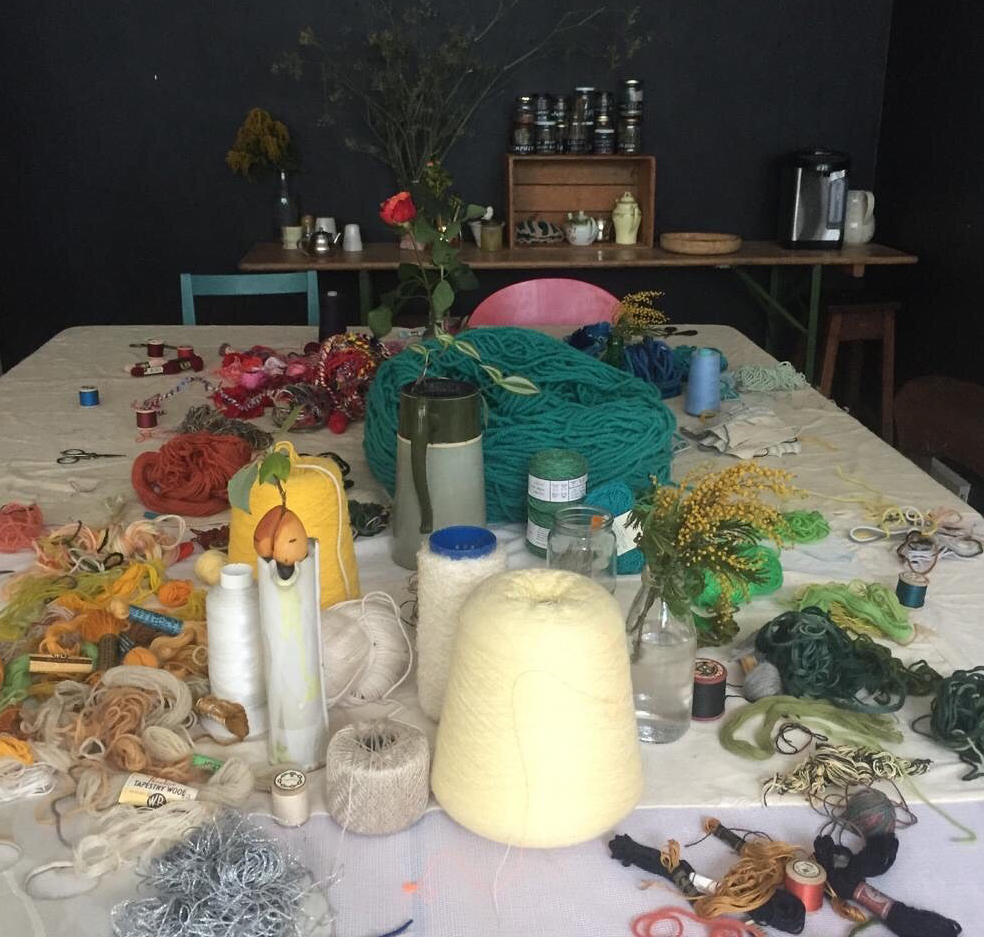 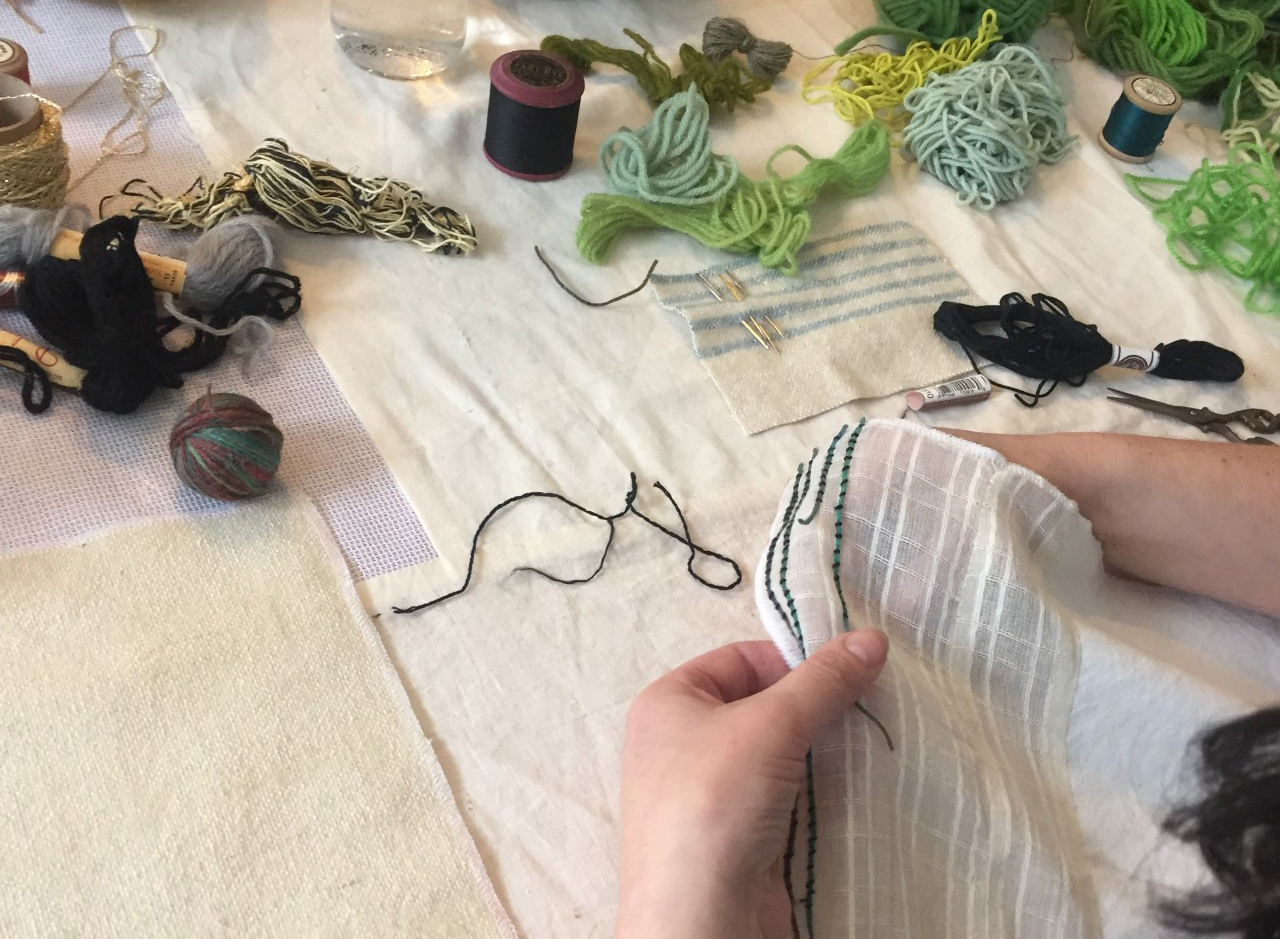 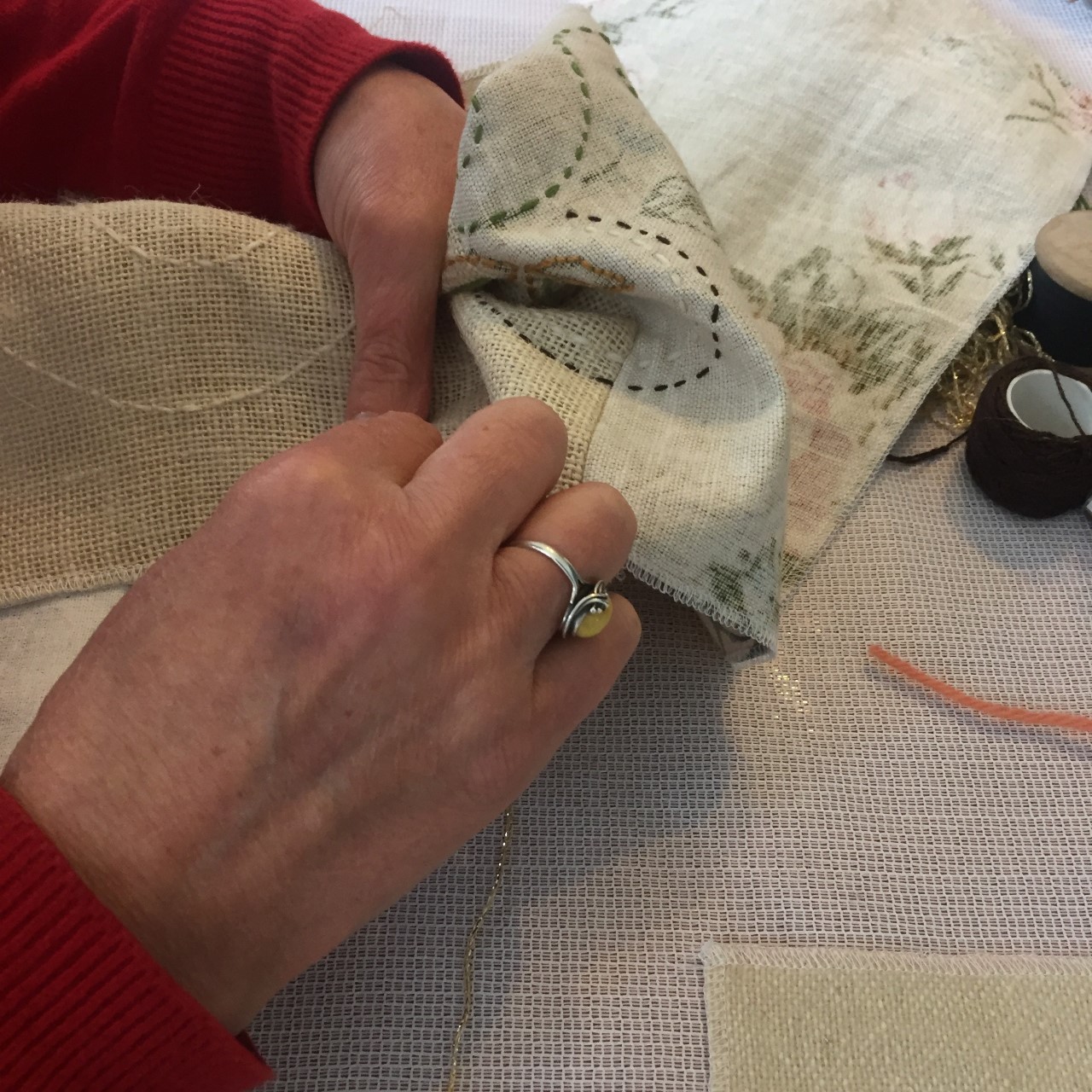 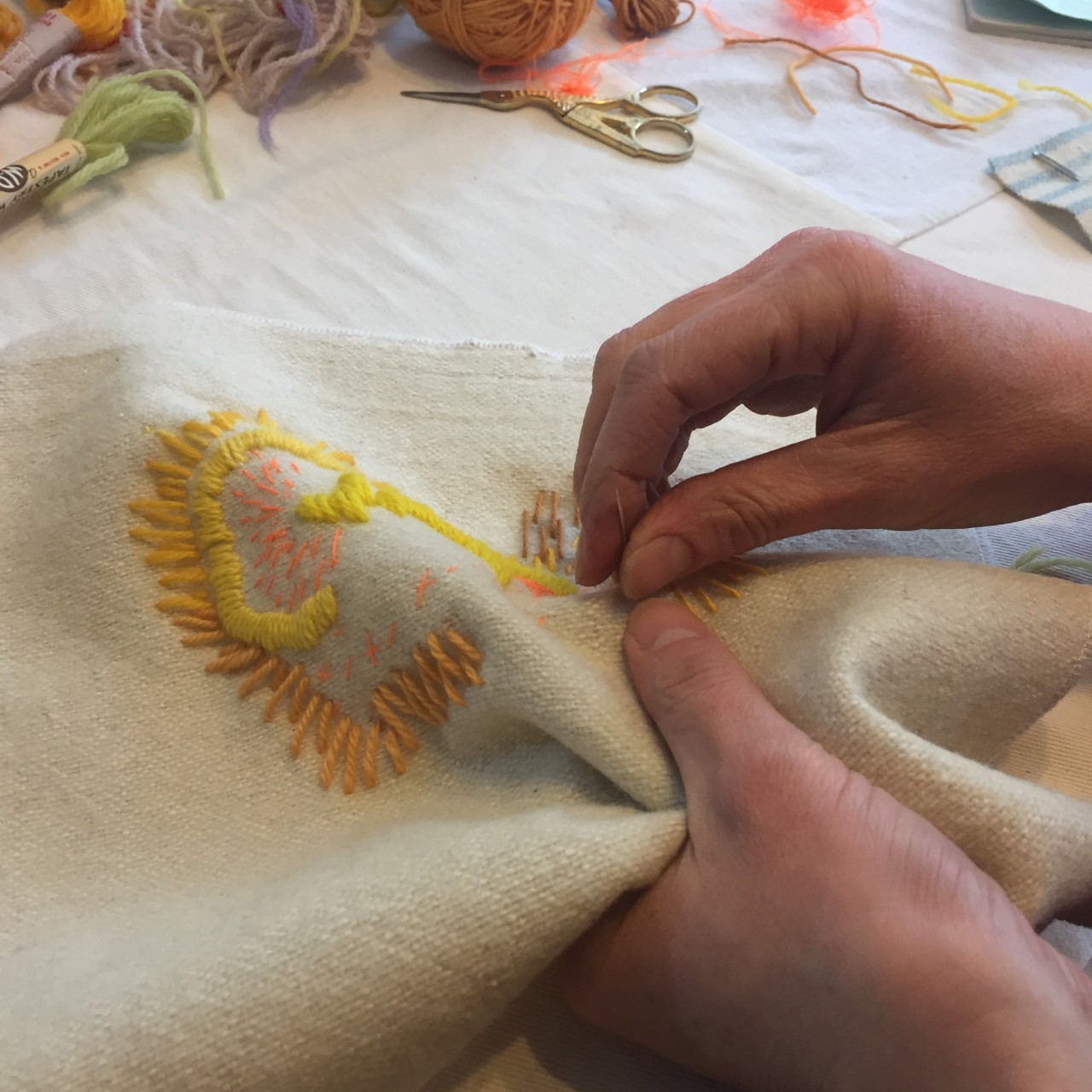 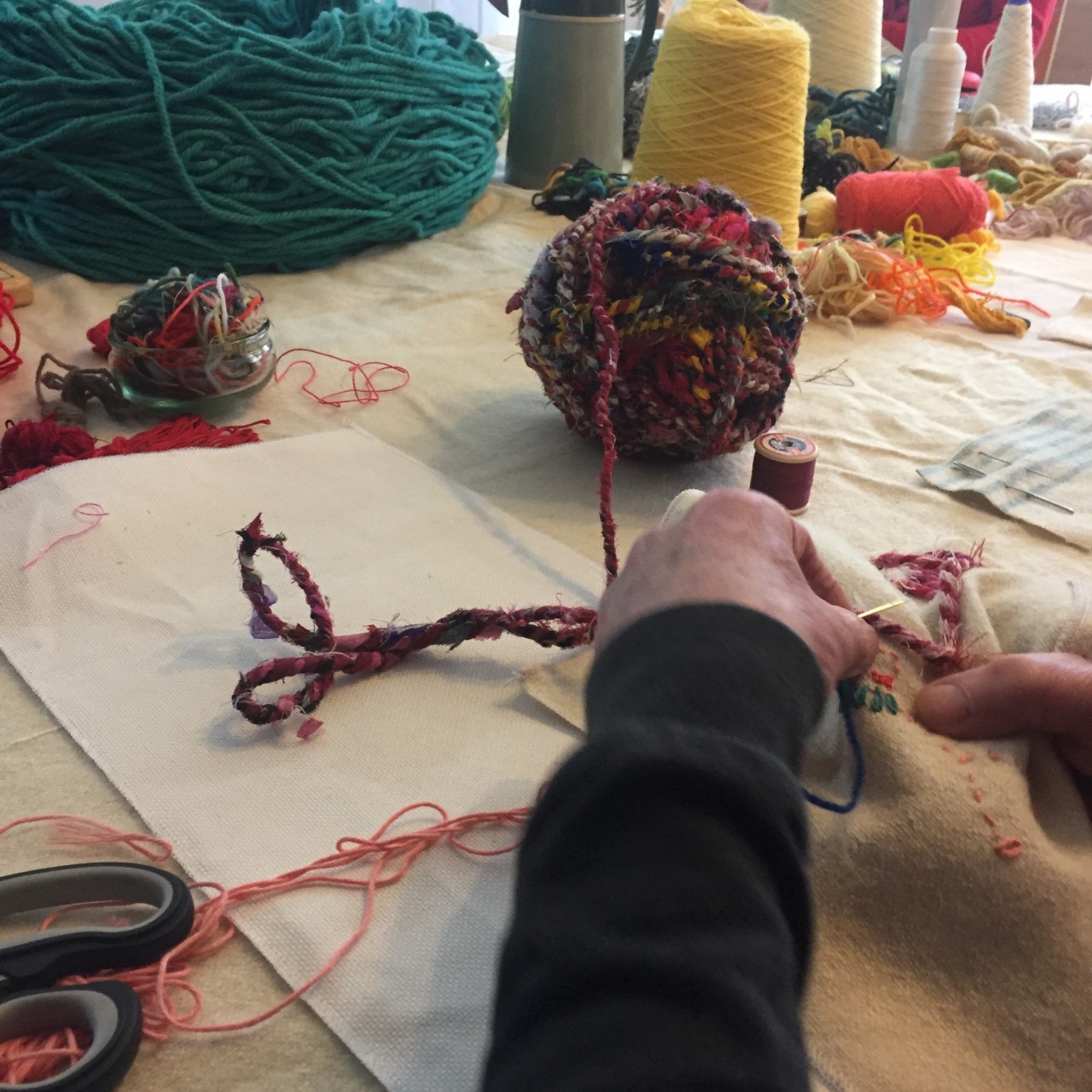 This is a free event, but please book as there are limited places. Donations are welcome to support the tea bar and cake. Please bring food to share.

@studio.ateljee.stiwdio, Main street, Goodwick (Next to the Post Office) 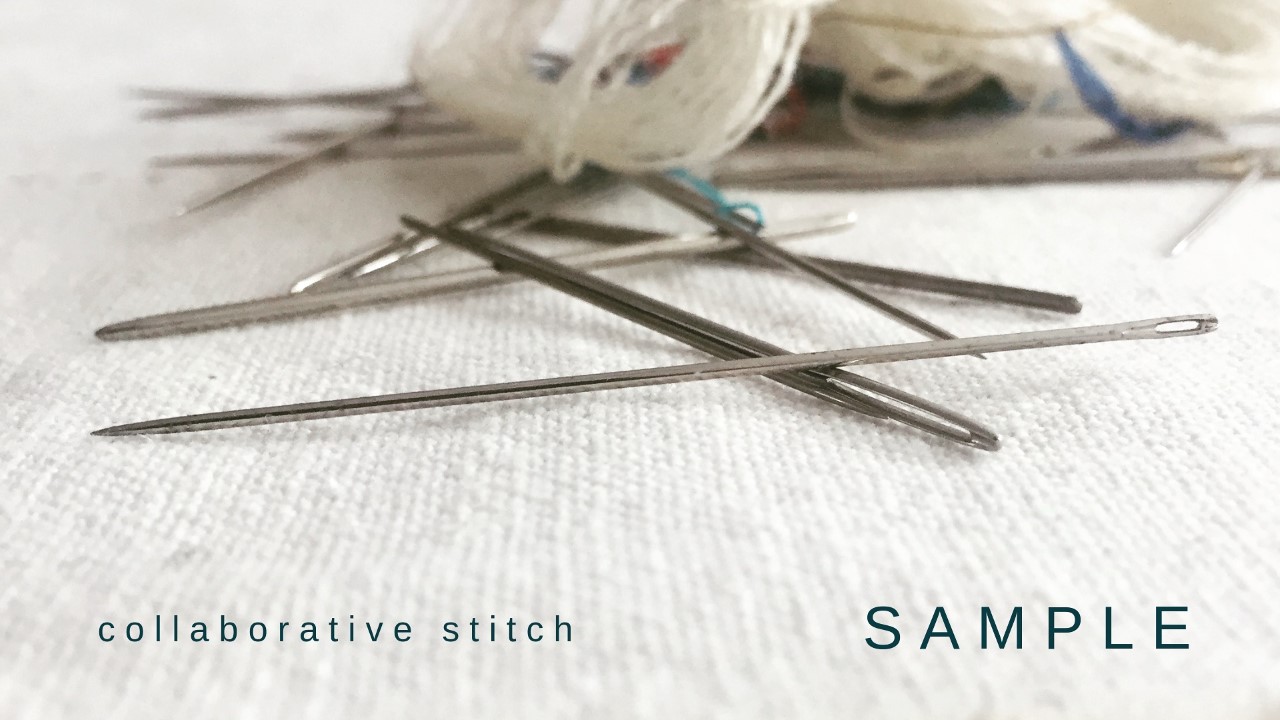 S A M P L E  is an exiting new Holy Hiatus project with a series of creative workshops and events,  exploring colour, fibre, texture, light and sound. Over two years Holy Hiatus will be working with the community , local artists and designers, creating collaborative artworks for a multi sensory communal exhibition.

Here’s the short film that was created from the Big Flock event. 120 people took part, raising £120 for RSPB. We hope to run the event again next year

Imagine not thirty people but several hundred making a human murmuration on Newgale Beach! Come and join in, everyone welcome, all ages, all levels of mobility. There will be a flock that’s just the right speed for you. We will have some fun learning some simple movements and keeping in time with your flock.

Dress warm in layers of blues, turquoises, greys (no big logos on clothing if possible please) Wear trainers or other comfortable shoes. Warm hats are advised! The event will happen whatever the weather, so if its raining bring waterproofs. Children of any age are welcome. A parent or guardian must stay with children in the same flock unless the child is over the age of 10.

There is free parking available at the Duke of Edinburgh Pub and near Sands Cafe (Solva end of the beach) and ticketed parking at the south end of the beach. Please car pool where possible.

You must register for this event. It costs £2 per person, £1 of which goes to RSPB. 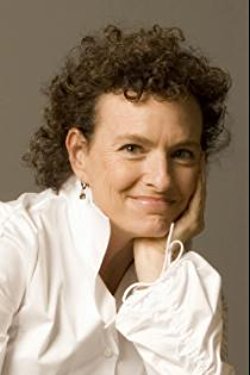 Kim Rosen, M.F.A., has awakened listeners around the world to the power of poetry to heal and transform individuals and communities. She is the author of Saved by a Poem: The Transformative Power of Words.Combining her devotion to poetry with her background in psychotherapy and spirituality, she offers lectures, workshops, retreats and Poetry Concerts all over the world.

Hosted by Holy Hiatus, Kim will be offering a non-residential weekend workshop A Broken Hallelujah at Small World Theatre, Cardigan, west Wales from Thursday 28th June – Sunday 1st July 2018. This is currently her only UK teaching event in 2018.

The documentary film created out of the Gather / Casglu workshops and events last April is now available for viewing :-

This was a collaboration between Holy Hiatus and Joon Dance. Plans are afoot for next years Gather / Casglu workshops, which will take place between Thursday 5th – Sunday 8th April 2018. Further details will be announced soon.

As well as the half day workshops, we will be hosting The Big Flock on Newgale beach open to anyone of any age or ability. This will be a fun event for all the family, and will accommodate people with different levels of mobility through a number of smaller flocks of differing speeds, all of which will encounter one another and interact together on the sand. To get an idea of how this might be, watch the video below and imagine this taking place with a few hundred people! 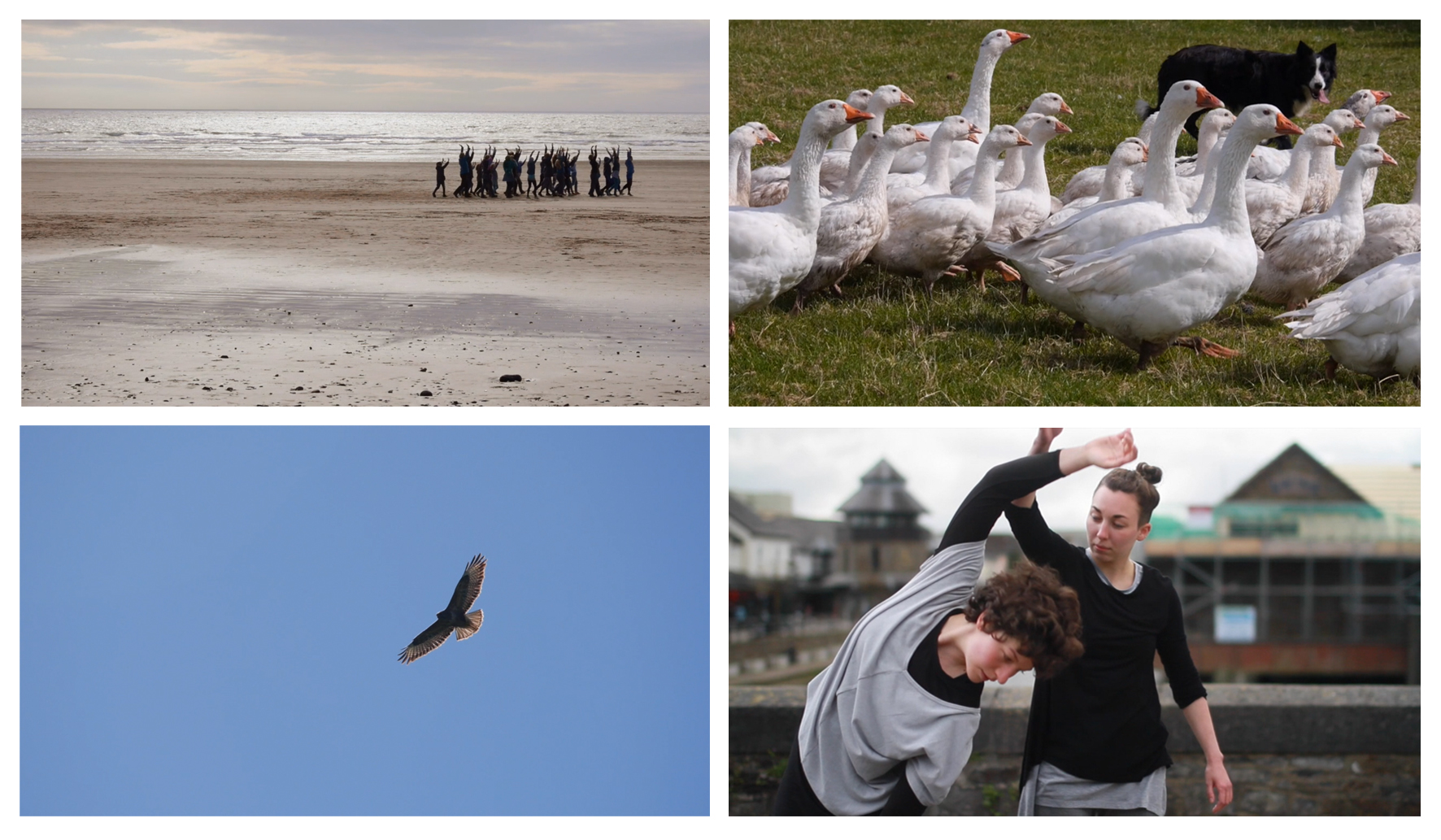 This will be the first public screening of the new video installation Gather / Casglu by Ruth Jones with a soundtrack created by electronic composer by Andy Wheddon. Jones’s film work is characterised by rhythmic editing, and long slow shots that draw the viewer into a contemplation of place, patterns and presence.

The film has been created from landscape imagery shot in Pembrokeshire combined with footage from the Holy Hiatus and Joon Dance collaborative project Gather / Casglu in April 2017 – a series of outdoor site-specific dance workshops exploring place and the movement of people and animals through the Pembrokeshire landscape led by professional dancers Zosia Jo, Sally Smithson, Gareth Chambers and Louiseanne Wong.

Also showing will be the documentary film about how the dance and movement project evolved and the responses of those who took part. This was a truly multi-generational event in Solva, Newgale and Haverfordwest with participants from ages 4 – 79.

(images above: stills from Gather / Casglu filming by Ruth Jones and Sharron Harris)